Since the beginning of the quarantine I have been testing ways to play Warhammer Underworlds solo, one of the most comfortable variants to implement alone is the Glass-Mad Gargant which appeared in White Dwarf magazine in December 2018. 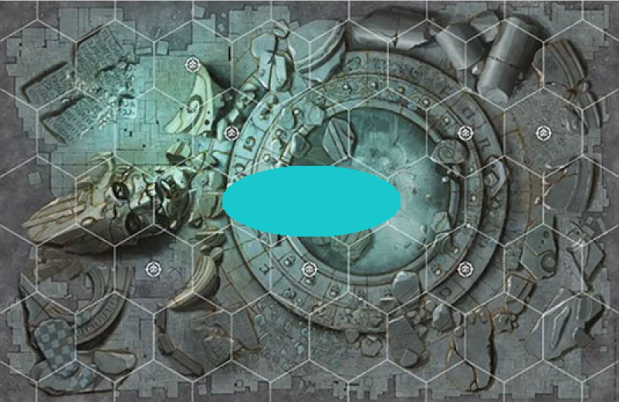 If there are not avialable hexes, place the Gargant on the two free hexes that area nearest the center of the line. Example:

As in a normal game against the Gargant, it starts the round. Unlike the multiplayer variant in this the Gargant moves with the Scatter Token and the dice results.

In the solo variant certain rules are omitted: Thickenin Hide, Abominable Regeneration and Bellow of Outrage only apply when the Gargant is inspired.

In this example the Gargant is facing the right edge. The Scatter Token is placed with the Hammer face always pointing in the Gargant´s frontal direction.

Each die will determine the direction in which the Gargant will move based on the result and the direction of the Scatter Token. Example:

Considering that the Gargant is in a frontal position, the first push would be a result of Hammer, followed by a push resulting from Swords.

After the pushes are made, the Scatter Token is adjusted according to the frontal direction in which the Gargant is (Remember that hammers will always be considered the front)
The Gargant will then attack the model in range of one of his attacks, if there are two or more models in range of one of his attacks they are chosen according to the Priority Table. (See at the end)

To test your strength and that of your warband in this Variant you can choose one of the 3 difficulties.

Or you can play with any preparation you prefer.

This table determines which Warrior to Push and / or Attack in the event that several Warriors are found adjacent to the Gargant or in Range of any of his attacks.

You manage to be crowned the Giant Slayer if you manage to eliminate the Gargant before the end of the fourth round.

Otherwise you can keep track of the total Glory points obtained on the difficulty you decide to play. (At the moment I can’t get past 15 Glories in Normal mode)

I’ve played a few games in this mode and I found it quite entertaining, managing to roll the dice and send your warriors to charge during a quarantine period is the best. Please note that it is not a balanced system and can still be polished to provide a better solitaire gaming experience. I accept all the suggestions and recommendations that you can give me in the comments.

Until next time in the mirrored city …